Tapestries and Shoes at Croome

Last Sunday The Management and I had a day out. I started with a leisurely 10k run (in which I got my best time so far – if you are interested in my running progress check out my running blog here ), and then we went to a National Trust property called Croome. We had seen reports that they were holding an exhibition of tapestries by Grayson Perry and I really wanted to see them. As a bonus we discovered a small exhibition in the basement called ‘Soul to Sole’ which was just delightful. 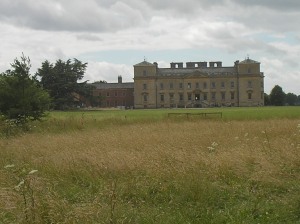 I had read about Grayson Perrys tapestry series called ‘The Vanity of Small Differences’  and thought it would be interesting to be able to see them in detail, and also madness not to go when they were so local. I am not terribly familiar with his work, but I did see a post that Celia of Fig Jam and Lime Cordial did a while back and I saw things that I really liked. I know not everyone would, but I do think that art should be challenging on occasion.There was a video presentation, and a display of his sketches inn the same room. I thought the sketches were well worth having – they gave an opportunity to see how they looked both small, and in a different medium.

The tapestries were all HUGE! Think back to the sort of tapestries you see in the traditional National Trust properties. I loved that he had brought fairly familiar themes up to date – and that you could spot things that were in everyday use, and also people you recognise (hello Jamie Oliver!, and I thought the ‘Madonna’ character looked very Colleen Rooney). I seem to have missed one tapestry in photos but I hope you get the idea from my, occasionally appalling, pictures. There are a couple of detail pictures just to show the texture, and also a ceramic vase that was included which I loved. 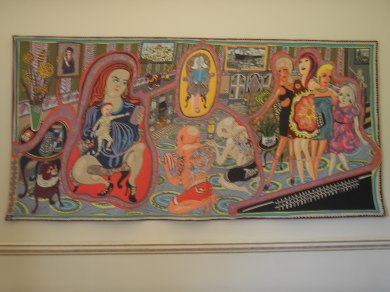 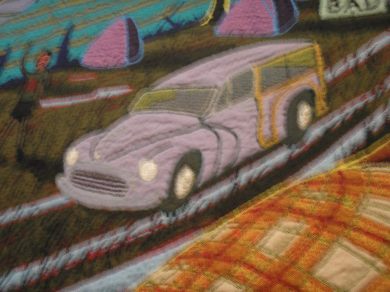 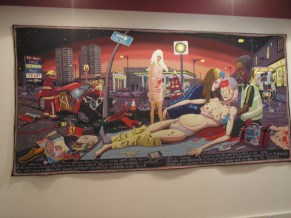 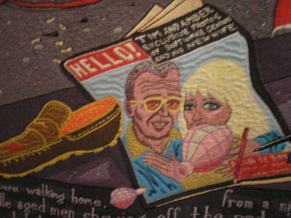 The exhibition is at Croome until September, and as there are more things we would like to do there I may be back again before these go away.

‘Soul to Sole’ is an art installation using shoes as a means of describing some of the ‘souls’ connected with Croome. Sadly my pictures don’t do it justice – I was tired, and also being hurried along by The Management. There is more information about some of the shoes on a blog set up by the resident artist here. 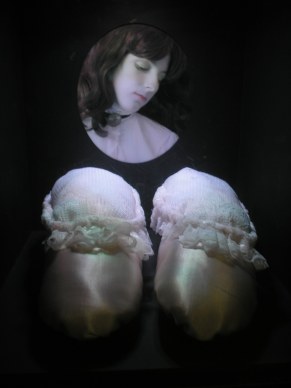 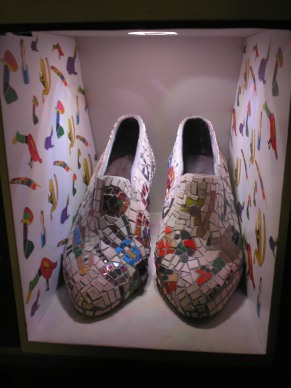 Depicting the animals in the menagerie

The Aristocracy would clearly have had a fairly ‘charmed’ life, not so the maids who the following shoes were attributed to – lists of tasks to be completed were embroidered(?) onto the shoe. The shoes on the right were depicting Hilda, a servant from the 1930’s, memories – I can’t imagine it would have been very much easier as a servant even then. 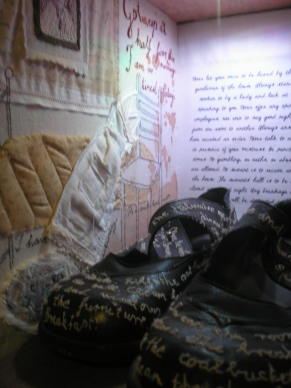 Jobs for the day ‘written’ on the shoes 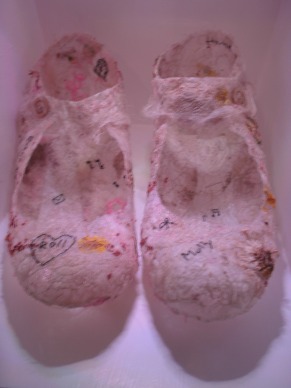 Gorgeous ‘felted’ shoes depicting the memories of HIlda, a servant at Croome in the 1930’s

In 1942 a local airfield becomes RAF Defford which has strong links to the house today. The shoes below were inspired by Joan Gill, who was driver to RAF Deffords CO during world war 2, and the childhood memories of Michael McDonald who was the child of an RAF captain who remembers playing in the grounds as a boy. That must have been an idyllic childhood playground. 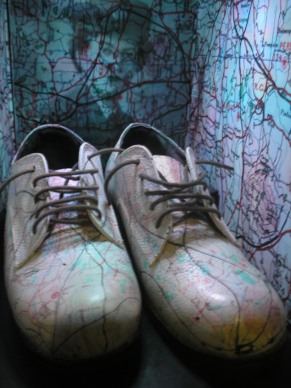 Sadly Croomes family fell on hard times and sold the estate in 1948. The house became a school for boys. I remember wearing sandshoes just like these as a child, and the shoe cubby holes were left from this era. It stayed a school until 1979 when it became a centre for Hare Krishna devotees – sorry about the picture quality. They didn’t stay too long, selling the house in 1984 to property developers, and the National Trust took control in 1996. 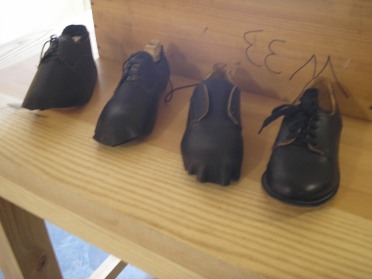 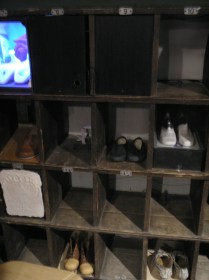 A view of the shoe cubby holes

Pumps or sandshoes from the days as a school

From the Hare Krishna time 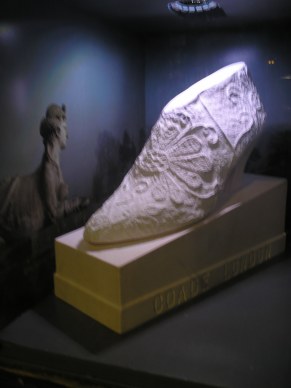 Celebrating the invention of Coade Stone 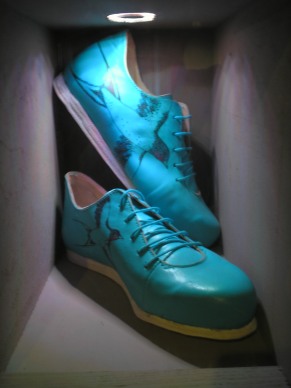 Shoes inspired by the house martins nesting in the house.

If you click on a shoe picture you should find more information.

I enjoyed the exhibition, as much for it being so unexpected as the shoes being so unusual. I have enjoyed looking up some of the people involved – particularly Eleanor Coade who is the 18th century  LADY who invented the artificial stone known as Coade stone. She must have been an amazing person to have achieved that at that time. 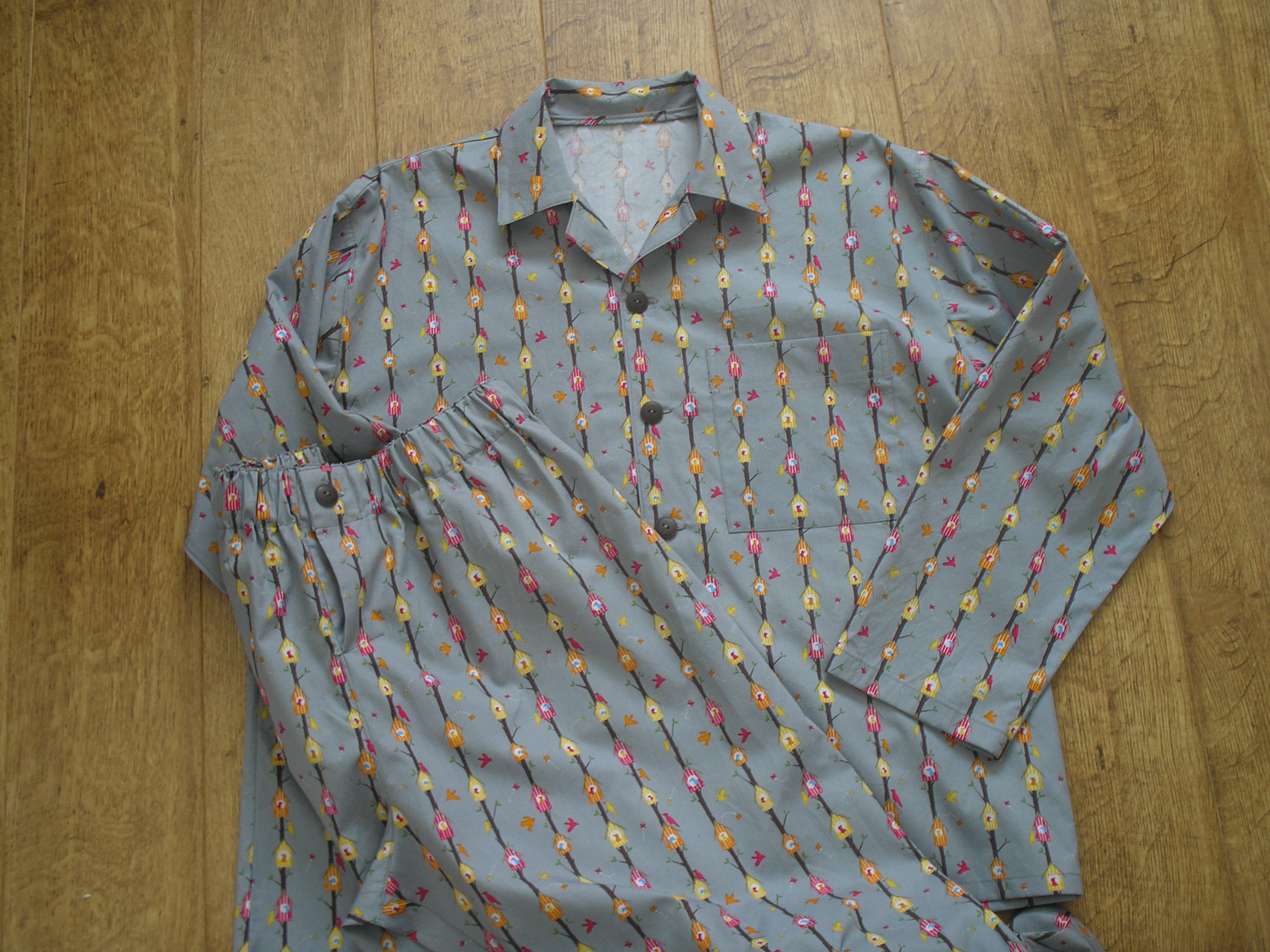 PJ’s for The Management

I have finally managed to finish the first PJ’s for The Management, the first of the fabrics I bought on the Birmingham meet. I’m very happy with the way they look, and I know that he liked the print so I hope he will like them too. They aren’t going to be ‘easy care’ as they are a pure cotton, but they should be cool to wear should the weather here get hot at night.

I got a selection of fabrics out from stash yesterday and ordered them into groups that would work together. Hopefully I will get going on things for myself very soon.

27 Comments on “Tapestries and Shoes at Croome”