Sometimes you just need to tweak a bit

Sometimes when I don’t know quite what to do (sew) I head back to my wardrobe to see what is in there, and what I am actually wearing from it.

It always amazes me how little of my clothing I wear on a really regular basis. I admit I am almost always in casual clothing, usually the sort that I don’t mind crawling the floor pinning client garments in, so I really need to consider this when I sew.

However, when you have got right to the back of the wardrobe and dragged everything out it is a perfect time to try on and clear out. There were a fair number of things I immediately decided had to go – if they hadn’t been worn in 12 months there had to be a reason. Sometimes it was clear that something could be done to make things wearable, on other occasions it just wasn’t worth the time.

Better.. but not quite

Remember this dress? I was slightly amazed that I made this in August 2011 (yes, I do hang onto my clothes a long time) and have worn it a number of times. I really like the cool cotton fabric – and it has birds on it. whats not to like? However, with the exercise I have been doing I have changed shape a bit so the picture on the left shows the horrid reality of how it looks. Ouch.

I pinned the back and  hem to see if that would make it work and I am happier, though I think it needs a proper assessment of what is needed rather than a quick whiz round with the pin box. When I have more time I will get at this with a fully engaged brain.

The other thing that almost ended up in the recycling/charity bag was a pair of RTW shorts. I rarely wear shorts but I have been recently tested for Vitamin D levels which turned out to be very low so my intention this summer is to expose more skin whenever the sun is out. Sorry world. 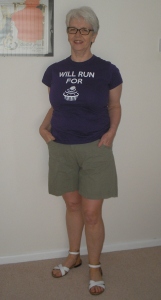 This pair reminded me very much of Donn Estelle as Lofty from the old TV program ‘It ain’t half hot mum’. Not quite the look I wanted. Once pinned up a couple of inches they looked acceptable. Not lovely, but I will wear them until a better option is available.

With regard to the sewing I was considering in my last post I have decided to make the Stacie jean jacket first. I circled the patterns many times before making the decision which was entirely based on the fact that I had everything I needed to make Stacie but would need to plan and buy supplies for the other options. You will be surprised to hear that the fabric is another bright – either yellow or orange (again) depending on how I feel when I go to cut out – but I have a soft rayon or cotton type fabric (nice, been around for ages so I can’t be bothered to test) which will make a coordinating dress or those wide trousers. wow, wardrobe planning.

Since the weather changed here in the UK to be a little warmer lots of my clients have come out from hibernation (or I think that’s where they have been) and I have too much ‘work’ to sew for me at the moment. Oh well, the sooner I get it done the sooner I can sew for me again. Bye!

I haven’t mentioned the Janome Coverstitcher for a while but we have been making slow progress together, not perfect, but a truce none-the-less. I had been avoiding the whole ‘sports fabric’ area and just concentrated on the sort of things that enabled me to learn more about this strange machine without completely freaking me out. Then this arrived.

They both need to be the small size

My darling daughter has secured a place in next Aprils London Marathon and is going to have to really ramp up the training through the winter.Just the time that laundry becomes more difficult. So, she needs more sports gear. As many runners out there know some events give away a t-shirt on completion of your run. Rarely are they the right size – hence the need to adapt the orange monster above.

My first attempt at remodeling a ‘too large’ sports top ended in disaster. I really shouldn’t have tried that sort of a project as one of my first experiences of coverstitching. I had skipped stitches, terribly wobbly seams, and in all it was just awful.

One of the problems last time was that I was ‘working in the dark’ with no real idea of what was needed. This time I had a top I knew fitted and was comfortable for her to run in to copy. Using pattern paper and pins/tracing wheel I was able to make a pattern I was pretty confident in – and with the experience I had in general pattern cutting I was able to iron out a few snags before I got to the top ready to start cutting it up.

Thankfully having used the machine more now the second attempt went really well! I didn’t change to another needle, didn’t fiddle with any of the tensions, or any other voodoo and it worked just fine. Maybe it was just because I had relaxed? Anyway, the seams weren’t precisely straight – but were straight enough. They were stitched flat so they wont rub, and didn’t have skipped stitches. I was veryhappy.

Happy with the job this time!

When she comes to stay for Christmas my daughter can take these away – and hopefully one of the other two outsized tops that are waiting for attention. She has been advised that in future if she can’t get a top that actually fits to go for the largest available so I have lots of room to adjust!

Whilst I do run/jog I don’t go anything like as fast or as far as her so I enjoy taking in my surroundings (yes, I go that slow!). I was surprised to find penguins in Bewdley the other day on my little circuit from home. More bombing!

The one in the middle has been fishing!

They really cheered me up – although the local anglers will probably not take kindly to them fishing! We have a seal in the river at the moment (whom I have looked out for and not seen – boo!) and there is a campaign to have her relocated to the sea as she is reducing the fish stocks. How long before they want to relocate the swans?

Make do and mend

I hadn’t realised how long it has been since I posted. Please accept my apologies – I have been working on clearing ‘that pile’ of odd garments that we all seem to have which we intend to try and make more wearable. I may have managed with some of these but I will leave you to decide.

I decided to make a start with this blue top that I ‘Quite liked’ but never really picked out to wear. After some deliberation I decided that  the problem was the sleeve – it just felt a bit ‘baggy’ and carried on into the underarm. The fabric was not expensive so I was very happy to just run the sleeve through the overlocker  to narrow it , continuing a little way into the body side seam. Better I think. This top was from Burda magazine (10/2008) and whilst I quite like it I remember making an adjustment to tighten up the front neckline (to make it a bit more modest I think). In retrospect this really wasn’t necessary.

Rear view – and those leggings!

I pulled out a dress in a fabulously bright (not what The Management called it!) cotton jersey. This was also from Burda 10/2008 – the magazine obviously hit a chord with me that month. I know this pattern is available on the Burda site to download and have seen some other versions blogged fairly recently. I love this dress. It would have been nice to have had a picture when it was a dress but I forgot that. Why wasn’t it worn? No idea. I have another version in purple crushed velvet which is my ‘go to’ dress for winter. Anyway, as so many of my tops and t-shirts seem to be looking a bit sad I decided to convert this dress to tunic length. The hem is now about 24cm shorter than it was and I think I will probably wear it more now  (that will make ‘him’ happy!).

You might also notice the black leggings. Yes, they are the black Vogue 1214 leggings from the last post. I took the thigh seam in about an inch and graduated that to about 1cm (anyone else choose metric or imperial depending on whichever suits the purpose rather than sticking to one?) at the ankle. I had to go into the crotch seam a little but not significantly to do this so the body is almost as it was. I did however add elastic into the band around the waist. It is a nice deep band, and I am sure it would have been just fine to hold the leggings up, but I’m a bit of a wuss and wanted the security of that elastic! I think I like these now – but I have bought the Papercut pattern that seems to be well regarded so I will try that next time.

Yes – I really liked this pattern!

I liked the adaption to the colourful dress so much I decided to shorten another from the pile. This is a polyester jersey that I bought from Birmingham – I can’t think why particularly but I do like it. And the pattern. So, another tunic.

The next victim was a dress I made last year. This is Vogue 1027, and I really liked this when I first made it but it never felt quite right. The bust/waist ratio never felt quite right when I was wearing it. I was pretty upset about this – I thought I had found a real gem to make again and again. Maybe I am just not a dress sort of a gal. Or not the ones I have been choosing. Scissors at the ready, and now it is a skirt – with pockets. Don’t you just love pockets to swing in?

Pockets in skirts are great!

I suspect it may get more ‘outings’ now that it is a skirt but I would still love to find that elusive dress that would make my wardrobe sing. I love the idea of dresses  even though I am not a ‘girly girl’ . Maybe this on was too full skirted. Maybe there is just too much me. I am not going to get upset about the previous mistakes as I think you have to try new things out to have a wonderful surprise from time to time.

I have also been knitting – and that Kim Hargreaves sweater is almost finished now. I think that will probably get a bit more attention to get it to the finish line! What it really needs is a pair of smart trousers to go with it …..

Back soon. I promise.