A long time ago (in a land far away…..) I joined a Stash busting Group on Facebook. Yes, I see the joke too. It hadn’t occurred to me that this would be so useful – and it also directed me to a group that were issuing Sewing Challenges. What better way to induce you to sew. I love a challenge!

So, back in January I joined a challenge – the SSW:Deep Stash Challenge. It seemed like a breeze to sew eight (yes, 8) garments from patterns bought before 31st December 2016 before the 30th April deadline. A mere two a month would be a piece of cake. Or so I thought before my gall bladder interfered so much. 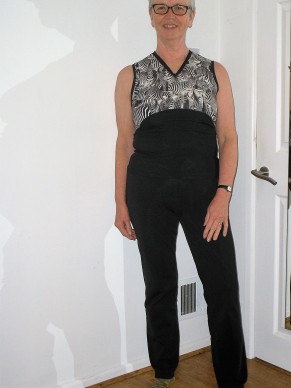 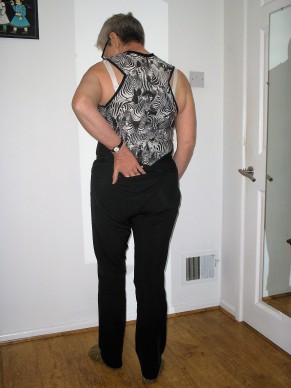 I started strongly in January with the Fehr Trade VNA sports top and the self drafted warm ‘leggings/trousers’. The top was blogged here as my Jungle January garment but I never blogged the trousers. They were made from warm lycra from Funkifabrics bought an age ago and have been worn pretty much constantly since. I love these trousers, and the top has been worn for both yoga and running and I can heartily recommend it. I even managed to use Butterick 6388 for the first time.

February was OK too, I made up the Savage Coco Presto top as a dress, and also made the first incarnation of Butterick 6388 as a dress. Loved them both. Both patterns that had sat around a while, the Butterick unused until January and now a strong favourite in my wardrobe. Details here. 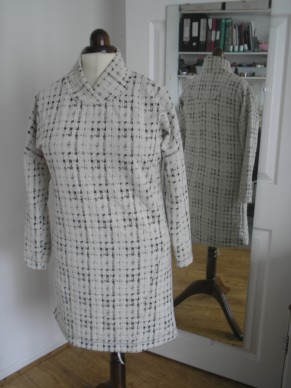 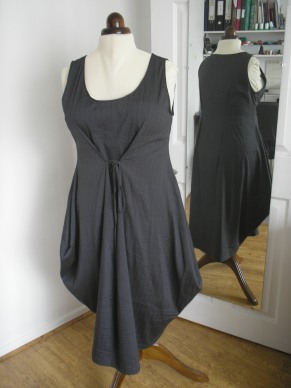 Although made in March (I’m pretty sure) the dresses I made next weren’t blogged until mid April. Yet another Butterick 6388 – didn’t I say it had become a firm favourite? – and Vogue 1410 by Lynn Mizono. Both now well established in my wardrobe (I have even cut out another Mizono for summer – ever the optimist!) and I seriously can’t work out what I had against wearing dresses for so long as it makes getting dressed a breeze. No trying to find matching bits. That truly appeals to my lazy side 🙂

Following this I got seriously slow and almost gave up on the challenge. We had the break in Cornwall, followed by a manic week clearing jobs before my surgery, and then a week recovering. And reading old blog posts, sorting through patterns, and making plans. 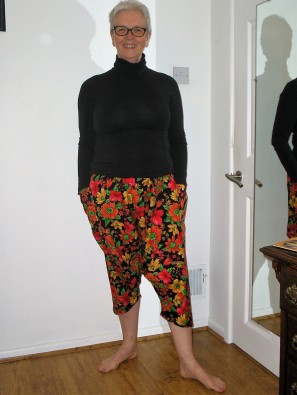 The sharp eyed among you might recognise these flowered ‘what nots’ as the garment The Management called ‘scrousers’. The pattern was from Patrones magazine and was first made in July last year (details here) and worn more than I expected. I decided that they needed to be shorter and have pockets this time.

Since the originals can be worn facing in either direction I didn’t want to lose that when I added pockets. Easy alteration to do – side panels make adding the pocket a very easy alteration. There is a (very) minor nod to current fashion by using a floral cotton from very deep stash for these. Nice to clear that away, and I know that when it is positively tropical here in July/August I’m ready . Stop sniggering – I told you I was an optimist.

I really thought I had given up after making six of the eight garments required to complete the challenge and then I saw Carolyns blog and another of her gorgeous makes from her Japanese pattern book collection. Back on the horse Hood! 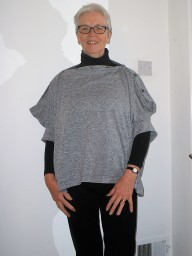 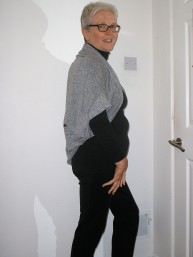 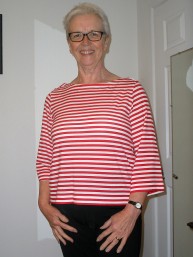 Now Carolyn had adapted the last incarnation of the top she made but I knew I had that book (She Wears the Pants by Yuko Takada), knew I had taken it off the shelf frequently with the intention of making several of the garments inside, and had made precisely …..  none. Time to change that.

I really liked the Square Top (No. 11) and decided to make that first – although I had cut out the other top at the same time. The ability to wear it in two distinct ways appealed, and though I like it as a straightforward top it really is very square. The clue was in the name so I should have known. I will wear it like this but I think I prefer the way it can be buttoned up, turned around, and worn as a shrug. Magic!

The red striped top is the Top with Epaulettes (No.4 in the book) that I had been admiring on Carolyns blog. Why didn’t I make this earlier!!!!! I freaking LOVE this top. This will be worn to death (despite the fact that I look a bit ‘Where’s Wally’ in it) and will spawn lots of friends in my wardrobe.

So that’s it. I actually got to the end (and well done if you have too) and made all 8 garments needed in the time allowed. Just.

What have I taken away from the challenge? Get those unused blessed patterns out and start sewing woman!

So what about digging out a pattern you have been giving house room to and never made, or an old favourite that could replace one of the worn versions you made and love. You must have liked a pattern enough to stump up cash to buy it so off you go! Which pattern are you going to make? I have an idea which of mine you will be seeing soon.

Yet again time has flown by without my noticing. March is a distant memory, and April is already well advanced – how come?!

I really have been sewing and knitting between just chilling and enjoying trips out with The Management. Evidence below. 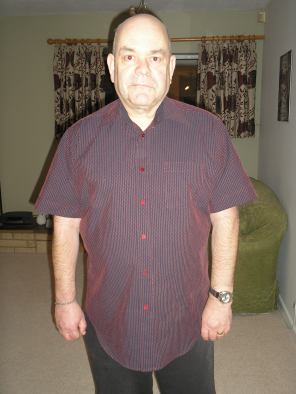 Firstly we have a really grotty photograph (why does flash make it look so bad?) of The Management wearing the shirt made from the fabric bought from Mood Fabrics in New York. I used the self drafted pattern which has been made multiple times now and is very easy for me to knock out. I struggled a bit to find buttons that worked on this fabric until I turned one of my stash buttons upside down and discovered that it was perfect. I even had enough of them. Score!

This has been worn on so many occasions now that I can confirm that it is (apparently) very comfortable, and washes like a dream. He claims that it is the most comfortable in his wardrobe so I must have got something right. If you have an amazing memory I did wonder who’s fabric would be made up first. His, but I have cut out my jeans from the pin striped denim. They are waiting in a queue at the moment. 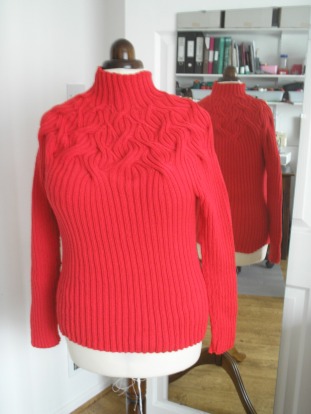 Remember the Purl Soho Botanical Yoke sweater ? Finished, worn, and loved. How gorgeous is this? This version was made in  Drops cotton light and is perfect for right now but I really do want to knit another version in the recommended Cashmere and Merino mix. The actual yarn from Purl Soho is fabulous but I saw Colourmart in Shrewsbury mentioned in Kate from Fabrickateds blog and decided to check them out. Am I glad I did! I am lucky enough to live close enough to visit the unit they trade from and meet the lovely Sue. She showed me around in an attempt to find a yarn I liked but I got completely overwhelmed and had to come away just with samples to try before committing. I was even given a swift lesson in how to Navajo ply the yarn to bring it up to the thickness I needed. What service! The yarn I think I am going with is a very dark 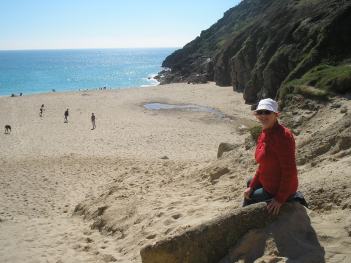 blue, almost black, wool/cashmere mix which will need to be knitted using my new knowledge. Now that I know about Colourmart, and know I can collect orders from them if I am visiting Shrewsbury (and let’s face it – I can think of many excuses to do that!), I will definitely be using their services. Thanks Kate for drawing them to my attention. I even got this finished before The Management and I managed to sneak away to Cornwall for a week. Doesn’t it look good by the sea? (I ask because I want to go back again. And again..) The bucket hats I made from Rhondas blog got good use in the sunshine that week too 🙂 . The jumper was perfect because although the sun was shining magnificently there was a chill in the breeze. Well it is just April! 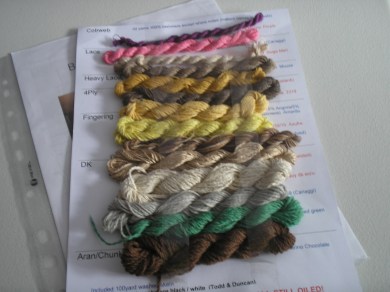 A Navajo ply sample – and a winner (I think)

There has been sewing  too. I saw the lovely Demented Fairy  in Birmingham wearing this  Lynne Mizono Vogue 1410 pattern dress and knew I had to have it! 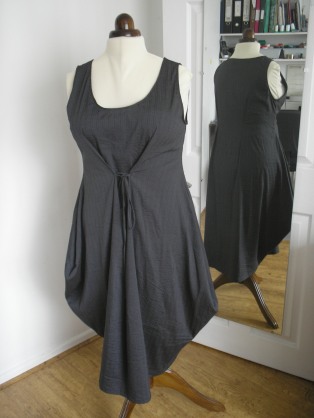 In my last post I showed some fabrics I had bought from Barrys bargain table. This grey was on there, and was described as ottoman but I didn’t get the exact fibre composition. There is a lot of stretch along the length of the fabric, and the stripes went across the width. I decided I preferred it turned sideways and there didn’t seem to be any reason why I shouldn’t. The pattern is very simple but I took issue with the idea that the neckline and armholes should just be turned and stitched so I used a self bias tape to neaten and finish them. I’m very happy with the result despite feeling like a dwarf after taking 5″ out from the length! The Management likes this too so there are certainly more in my future. 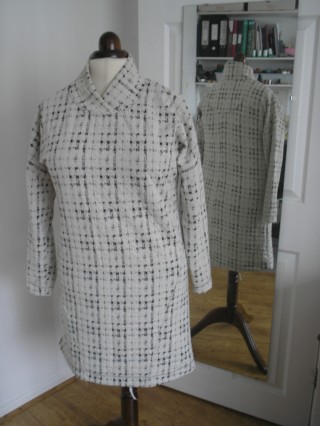 I made another version of Butterick 6388 , again dress length. You might recognise this as a piece from the last Birmingham trip too. This was a sample piece from the jersey stall that had a whopping great hole in the middle. I wasn’t certain this would fit from the piece but I managed to squeak it out. Again, I have worn this multiple times since I finished it. I put a very fine knitted interfacing into the collar this time as the others weren’t standing quite as as wanted them to. I’m much happier now. I think this piece cost me about £4 so I think I have a very good value dress now – only the thread and interfacing to add to that cost and that must have been pennies. Although we are now (allegedly) into Spring here in the UK I can imagine I will still get a bit more use out of this before it gets too warm.

Well I managed to actually make up two of the six pieces of fabric I bought in Birmingham before I went back and was led totally astray again by Fairy. Look at this lot! We did have another lovely day and it seemed rude not to join in the fabric buying. There is so much there that I’m not going to show it all this time – but I do promise to post again soon so you can see my treasure! 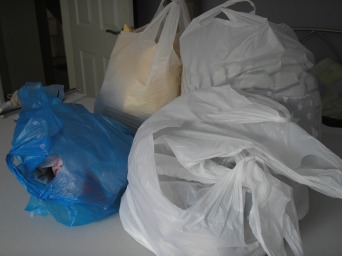 I have pre-washed all of this now so it is ready to use, I even have an idea of how I am going to use some of it. Whisper it but there is in excess of 12m in there. Well in excess. Oh my.