Stacie is a keeper!

Ok, again I never intended to take this long before I posted again. Time seems to be running faster as I get older – something I never believed when other people said that – as there are just so many wonderful things to do around things that have to be done.

I have had a great month of May and can hardly believe it is June already. I have finally got the client work under firm control, and I think that now we are into June there should be less until the weather changes again. Phew! Of course, that doesn’t include the panics from people who have just received their ‘bargain’ prom dresses from China or wherever and discovered they don’t fit (already had one of those – and not even Mrs Mole could have waved her wand over that one!). Still, I’m not going to schedule time for ‘what might’, rather plan what I can do for me around what is already there – not forgetting a bit of time to drag the garden back under control.

BUT I finished my orange Style Arc Stacie jacket a couple of weeks ago and have been trying to get photographs in some interesting place rather than up against my house wall. A nice plain background I admit – but a bit bl**dy boring. Sadly The Management could never be described as likely to worry Bailey and I have struggled with the tripod indoors so there is no way I’m taking it out!

With no further ado, I introduce the orange Stacie….. 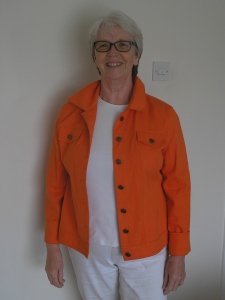 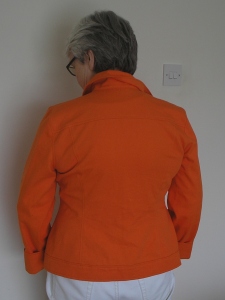 I know that when I first saw this pattern I considered making some changes but this version was made up exactly as designed. And I love it. I did ask The Management for his opinion of both orange jackets, and although he couldn’t say why he preferred this one. Just for comparison… 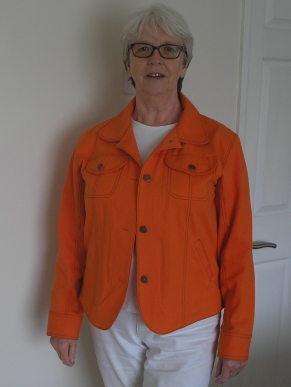 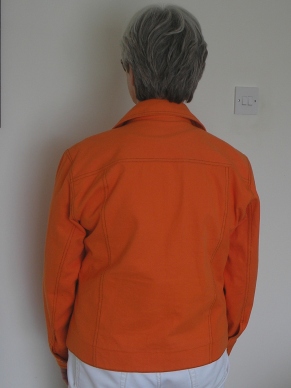 Both are made in identical fabric and made exactly as intended by the pattern maker. The Stacie was topstitched using the same thread as the construction, but using the triple stitch (supposed to be for stretch) from my machine that builds into a nice visible feature, whilst the Islander was topstitched with buttonhole thread. Other than that the materials are pretty much identical.

Stacie is more ‘pointy’, collar and corners, and has a more defined waistline. The Islander feels oddly heavier(?) and I just feel that it looks more ‘home made’ despite having some great features – check out the pockets and sleeve details.

I still think that I will change bits of the Stacie pattern in the future but now feel unlikely to make the Islander pattern again. I did use skills learned from the Janet Pray course whilst making up the Stacie so I feel the experience of making that was worthwhile. I have worn the orange jacket so much since I finished it that when I found a lonely chunk of black cotton twill I went straight ahead and made this. 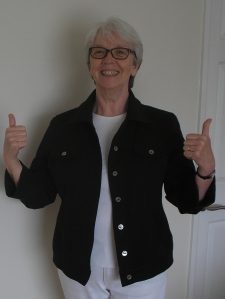 I was so happy with the fit and styling of this jacket I have already printed Ziggi ready to gather what’s needed to make that.

My style – or style rut?

Every so often something happens that makes us question our choices. The prompt this time was a blog post I read by Sew Tessuti who was showing a selection of patterns bought over a number of years – and so many very similar patterns.

This weekend I bought a couple of Style Arc patterns using the discount. Great time to try out a new to me pattern company who seem to have a very good following. Then I looked at what I had bought in the light of what I had read.

The first was a pattern bundle which included the Stacie jean jacket, Sally jean skirt, and Diana top. I really only wanted the jacket but it was such a good buy… well, you know the feeling. The other option was the Ziggi biker jacket.

These were both styles I really thought I would use – but wait a minute – do these look familiar?

Start with Stacie. I love jeans jackets. I have made a few in the past, check out this post, this one, and finally this one. Also, in a recent Patrones post I showed a jacket that isn’t a million miles from this. See a theme developing? All OK, but none exactly what I wanted.

The first (McCalls 5860) was a great basic shape but I followed the instructions pretty much as is and hated the way the lining was installed from the word go. The second was self drafted and just OK. I still wear it on occasion but it has never really thrilled me. The third was from a Craftsy course. I learned a bunch of stuff from the course, have worn this jacket quite a lot, but it seems a bit of a compromise jeans jacket. A ‘home sew’ option. I have read a number of blog posts about ‘Stacie’ and most are positive – but the pockets are just decorative rather than functional, and the cuffs seem to come in for some criticism. It would seem that the pattern companies are on a hiding to nothing as we have very specific ideas of what we want, but we don’t all want the same thing. Clearly I am going to have to do a bit of adaption to make Stacie exactly what I had in mind.

Now then Ziggi. I have seen some blisteringly good versions of Ziggi online. Check out Ruths version at Core Couture, or Shams at Communing with Fabric, or ….  any one of loads. Brilliant jacket. Perfectly biker – just what I want. But I have already got the Janet Pray MotorCity Express pattern as part of another Craftsy course (not yet started). I have put off starting the course because I had slight reservations about the pattern. I knew the lack of a collar was something I was going to have to change, and no matter how much I know I have gained from the other Janet Pray courses I have watched this one languished. Is Ziggi closer to what I want? I think so, but I really must watch the course because I’m sure it will help construction when I decide what I am to do.

Both of these jacket styles can be dressed up or down according to need but are arguably both fairly casual, every day jackets. That’s OK. Sadly my lifestyle doesn’t really have great need for spectacularly ‘dressed up’ clothing. However, my concern is have I just fallen into a style rut where I simply choose what is comfortable and familiar, or have I actually found that rare beast – My Style?

A little while ago I enrolled on Janet Prays ‘Sew better, Sew faster: Garment Industry Secrets course on Craftsy. It took me a little while to make a  start on this as I was a bit peeved to have to pay VAT+Post Office charge on the imported pattern. I should have known that I would have to at some point – but it was galling that the Post Office handling charge was more than the tax to pay. As I bought the course while it was on sale I really have no cause for complaint.

Anyway, I have been threatening to make something for myself for a little while but someone else always seems to jump ahead. I justified this as research.  I traced off the size I wanted to use rather than cutting the pattern as I may want to make a different size later. Rather than using the size I thought I should, from my body measurements, I have cut according to the amount of ease I wanted using the finished garment measurement. The size I thought I needed would have ended up with a massive amount of ease!

I have been spending tea breaks and such watching the online classes, and have bought a couple of things that I think may be useful. The first was a Rolson Magnifying head torch thingy from Amazon. Janet uses a professional standard tool called an Optivisor, but this was a fraction of the cost and included a torch on the visor. I have used mine today to unpick some tiny stitches on a linen garment for a client – I think I am converted. This has already proved its worth.

The other thing I bought was a pack of FRIXION erasable pens. Janet uses these frequently to fine line mark points on the garment. They can be erased with a hot iron, but obviously I will need to test them on my fabric before I go wild.

You may remember I recently bought a pair of Gingher shears which I have been very happy with. I was intending to use these to cut out the jacket – but Janet uses a roller cutter with mat. I have used mine just for cutting strips for bias binding and such but never thought they would be very good for an entire garment. Well, some things you just have to try. WOW! I was amazed at how quickly I got used to the pressure needed to cut both layers of cotton twill, and how to work my way around curves. I can’t say I am never going to use shears again but I am seriously impressed with how easy this job was. Like many dressmakers of many years experience (NO, not OLD dressmakers!) my wrist and hand does ache after cutting out and this really did seem to help.

Cutting out with the roller thingy!

I decided I had done enough tonight so I will cut the interfacings out tomorrow and see how far I get then. I still have reservations about the colour of this jacket but it is a way of trying out this system without being in the least concerned about cost . Or making a cattywompus (which after hearing Janet use the word today is one I will be adopting and making as much use of as I can!)