Some time ago I saw an Instagram post by the lovely Celia of Fig Jam and Lime Cordial which had a picture to promote the new series of Queer Eye. I was totally taken by the leopard print jacket that Tan France was wearing and decided I HAD TO HAVE THAT JACKET!!! 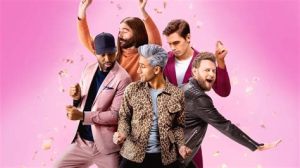 The decision to be made after locating the fabric was which pattern to use. I really love my Style Arc Stacie jeans jackets but wondered if it might be time to try a different option – and I had a pattern that had been waiting patiently for a very long time. I checked with The Management to see what he thought. Try the new pattern was the outcome.

I have to confess immediately that this jacket was to be made as a wearable muslin. You know, one of those thrown together projects just to test the style and fit of a new pattern. Clearly I didn’t get that memo.

The pattern is Vogue 1293, an Anne Klein design with jacket and trousers. I can’t remember when I bought this pattern but I know I have brought it to the top of the heap multiple times before it sunk without trace again. Not this time 😁. 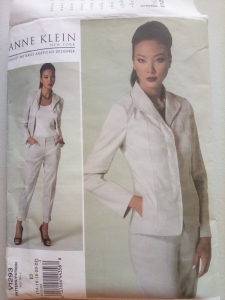 I really liked the details in this jacket but decided that this time it would have to do without the in seam decoration. After all this is just a wearable muslin……   . The fabric I decided to use was a creamy, putty, bleurgh coloured cotton twill that came from deep stash. I didn’t like it and kept delaying the start. What to do? So I bought dye  on a Birmingham trip with the Demented Fairy, threw everything into the washing machine as instructed and turned the fabric colour to ‘Rosewood’. Much better.

I measured the actual pattern pieces to ensure I cut the right size and got going. I didn’t take too long to discover I needed to go down a size. It would seem I need to redo my measurements after all of my gym visits and running club gossipy runs. I also decided at this point that I wanted to spend a bit more time on the finish and bound all the seams (am I forgiven now for taking so long to post?).

In between general life, and just enjoying the unexpectedly lovely summer weather, I staggered to a completion this week. Check it out (on Bessie who is still my old size).

I was strangely happy spending time hand sewing the top stitch detail round the fronts and collar, and whilst I like the concealed packet I’m not sure it was actually worth the effort involved (although I might change my mind about that). I’m very happy with the seam bindings and would take more time to actually make a good job of it next time!

Even though you can’t see this on me I can say that I was very happy with it. I decided to show The Management and remind him what it was going to be made in. He liked it. He just thought that the leopard print would look better in the Style Arc pattern. He was asked his opinion before I started but hey…. 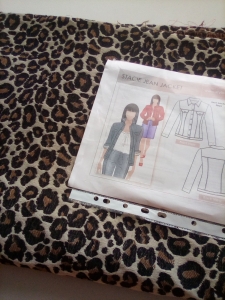 Style Arc Stacie it is then. I think it’s going to be fabulous 😍

Anyone who knows me will confirm that I am no Marie Kondo. I do try to keep things moderately under control but honestly, I’m failing miserably! I can’t believe just how much stuff I have accumulated. And I’m not just talking sewing and knitting stash (though that is pretty embarrassing) – all round the house things are running wild.

How many face washes do you need? Certainly not the three opened ones that I have, and also three bottles of moisturiser – one in use and the other two obviously bought in readiness. And don’t even ask about opened hand creams. Or lipsticks.

I’ll conceded that some of the stuff waiting for action is not ‘going to go off’, and will be used in it’s turn, but I really need to start using this lot before I buy ANYTHING else! I assumed that I would be a more considered shopper now that I allegedly have more time but I clearly need to work on that skill!

Whilst cleaning, and also slight clearance, in the room that bears the worst of my fabric buying excess I did manage to make things look better – fabric folded and put away properly or bagged ready to be passed onto the art teacher that takes my scrap, patterns tidied up , and magazines tidied into their respective boxes. All looking better – but how did I convince myself I have no UFO’s? Actually they technically aren’t UFO’s as they haven’t been started. I did read a lovely term for my problem which I’m afraid I’ve forgotten – but they are basically aspirational projects that I still want to make but aren’t anywhere near being made yet. A horrifying amount of them. Oh dear.

So, it’s agreed. I really need to stop buying yarn and fabric, also patterns, and start making up the projects I have waiting. With that in mind I gathered everything I needed (all available) to start another Purl Soho Botanical Yoke sweater. I had bought the yarn at Colourmart ages ago, the pattern had already been tested and worn here so I knew I liked it enough to repeat the experience. I started knitting whilst watching TV (loosely, as you need to concentrate at this point) and once past the first few rows I was happy I wasn’t knitting with a twist in the round so it has been nice to sit and enjoy the quiet of the project while I relax in the evening.

All was going well then? It was….

Until I visited a Scrap Store. I had been a little envious of the ‘op shops’ and ‘reverse garbage’ opportunities that seemed to be available in Australia – so many of the blogs refer to many of their ‘makes’ being from things rescued from landfill. The attitude to re-use seems to be much better there. I was confident that there wasn’t anything like that in the UK – the resale shops are called ‘charity’ shops here and don’t seem to have the same cachet that overseas equivalents have. Anyhoo, not to be put off I Googled a query and came up with Scrap Stores. I’m in the fortunate position of having several within easy reach, but my most local was the Worcester Resource Exchange. We were in that area last Saturday so I called in ‘just for a look’. Of course.

It was both fascinating and horrifying. There was stuff that you wondered if anyone would buy (only to hear people excitedly squeak when they found it!), and things you really wondered how you could justify taking them home. The Management was in the car so it wasn’t going to be easy to sneak things by him!

I was sunk when I saw the lovely bright merino wool felt – bags perhaps?, or maybe it could be used as a more exciting under collar on a tailored jacket? The stretch lace was completely unnecessary – I have a bag full of bits and pieces trawled from the Rag Market with the intention of making lingerie (another one of those aspirational projects) but I couldn’t resist. There were also lots of art supplies that I was seriously tempted by but I would have needed to find the bin marked ‘an extra day in the week’ even though I’m retired.

In another box I saw a load of used patterns, sorted by decade but just a lovely jumble to be looked through. And found four Vogue Designer Original patterns that I really liked. I swear that there were more but I didn’t just sweep them all up.

Who could have left Christian Dior – Vogue 1755, (in size 12 so I can probably make it up straight from the envelope although I haven’t done any thinking about fabrics yet), or Stan Herman 2057 – new to me but I love this dress shape, Diane Von Furstenberg 2065 – another very wearable dress, and lastly and Edith Head  1895 – I’m not entirely certain I would wear this but I do like it so it came home. Can I also say that after deducting my annual membership from what I paid this lot came to under £20. I’m afraid I will be back.

Yes, as you can see I am definitely cleaning and clearing. Just not my house. I hope to make use of all of these patterns – and a whole lot more that I have with plans attached to them! I really do need to get stuck in. I’ll be back eventually when I have something to show – but for now I’m off to knit while I calm my nerves 😉