What’s been going on?

Hmmm. It’s been a while (again). I wish I could say I had noticed the time going by but I really hadn’t. However, an update since I was last here.

I have done what seems like a vast amount of gardening – not my strong point but I’m trying harder now I have more time. I have been inspired by the amazing talent shown at Serendipity Revisited where an astonishing amount of work has gone into their Tasmanian garden. We had been discussing the possibility of turmeric growing in the UK. Filled with enthusiasm I took an age to track down some tubers(?) in an organic deli and bunged them in a pot, inside a plastic bag to simulate a greenhouse even though they were indoors, and waited. And waited. I planted four and was going to be happy if one sprouted but all four did! Check this out! 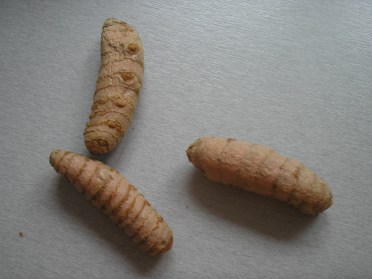 I had a lovely extended weekend in Northumberland, Edinburgh, and Cumbria at the end of May. I checked in with my mother, sister, and mother-in-law before carrying on to run a half marathon in Edinburgh. (More info about this in the Old Bat blog). We carried on from there to Carlisle which many of you know is the home of Linton Tweed. It would have been rude to have been so close and not called in – I got off fairly lightly buying only one remnant piece in a lovely kingfisher blue. 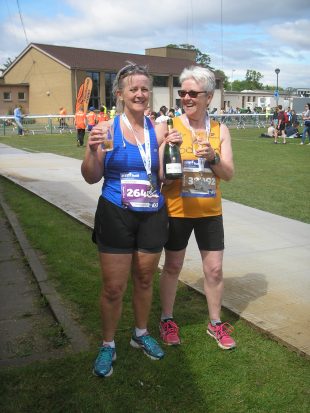 Bolly probably isn’t the best thing to rehydrate with!

I made up the Vogue 1410 again – this time in the yellow cotton stuff that I bought in Birmingham. The weather over the last week has been unexpectedly hot – everyone knows we Brits melt at above 25°C and it has been over 30 some days this week. As a result I have been very happy to have had this available (and both pairs of scrousers). I repeated the Epaulet top in the leftover cotton which worked well (The Management likes it) but I think it could do with a tiny FBA when made up in a woven rather than knit. Sorry, no photo. I’ve been cracking on with The Managements quilt too. I really hadn’t appreciated how long this would take! And I ran short of fabric.

Another trip to Shrewsbury was needed (Hurrah!) to buy the extra quilt fabric so I had the opportunity to make the order I wanted from Colourmart. But I added some. I bought the navy/black that is to make the Botanical Yoke sweater again, but I added a lovely cream cashmere blend double knit (Backbone maybe?) and a 300g pack of mixed cashmere lace weight. All gorgeous and I can’t wait to start. Off to Shrewsbury and I might have bought some more sock yarn. What can I say? 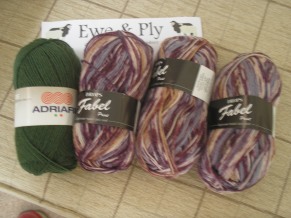 And what about the brown Larry Junior I hear you ask?

Finished! And if it wasn’t so bloomin’ hot I would have enjoyed modeling this!

Stay cool out there ’til next time!