A little while ago I enrolled on Janet Prays ‘Sew better, Sew faster: Garment Industry Secrets course on Craftsy. It took me a little while to make a  start on this as I was a bit peeved to have to pay VAT+Post Office charge on the imported pattern. I should have known that I would have to at some point – but it was galling that the Post Office handling charge was more than the tax to pay. As I bought the course while it was on sale I really have no cause for complaint.

Anyway, I have been threatening to make something for myself for a little while but someone else always seems to jump ahead. I justified this as research.  I traced off the size I wanted to use rather than cutting the pattern as I may want to make a different size later. Rather than using the size I thought I should, from my body measurements, I have cut according to the amount of ease I wanted using the finished garment measurement. The size I thought I needed would have ended up with a massive amount of ease!

I have been spending tea breaks and such watching the online classes, and have bought a couple of things that I think may be useful. The first was a Rolson Magnifying head torch thingy from Amazon. Janet uses a professional standard tool called an Optivisor, but this was a fraction of the cost and included a torch on the visor. I have used mine today to unpick some tiny stitches on a linen garment for a client – I think I am converted. This has already proved its worth.

The other thing I bought was a pack of FRIXION erasable pens. Janet uses these frequently to fine line mark points on the garment. They can be erased with a hot iron, but obviously I will need to test them on my fabric before I go wild.

You may remember I recently bought a pair of Gingher shears which I have been very happy with. I was intending to use these to cut out the jacket – but Janet uses a roller cutter with mat. I have used mine just for cutting strips for bias binding and such but never thought they would be very good for an entire garment. Well, some things you just have to try. WOW! I was amazed at how quickly I got used to the pressure needed to cut both layers of cotton twill, and how to work my way around curves. I can’t say I am never going to use shears again but I am seriously impressed with how easy this job was. Like many dressmakers of many years experience (NO, not OLD dressmakers!) my wrist and hand does ache after cutting out and this really did seem to help. 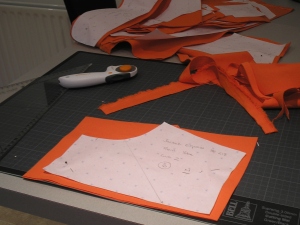 Cutting out with the roller thingy!

I decided I had done enough tonight so I will cut the interfacings out tomorrow and see how far I get then. I still have reservations about the colour of this jacket but it is a way of trying out this system without being in the least concerned about cost . Or making a cattywompus (which after hearing Janet use the word today is one I will be adopting and making as much use of as I can!)